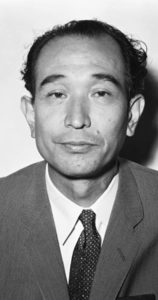 He is one of the masters in Japanese movie industry, including Kenji Mizoguchi, Yasujiro Ozu and Mikio Naruse, whose names are widely known in the world. He is called “Kurosawa of the world,” and also “Emperor Kurosawa” for his uncompromising and authoritarian stance, with respect and irony. He had an enormous influence on the filmmakers in and outside Japan. There are many movies that quoted the scenes from his films. For example, a fighting scene in “The Lord of the Rings: The Two Towers” by Peter Jackson quoted the shot of Kanbei drawing a bow in the rain in “The Seven Samurais,” and “The Last Samurai” by Edward Zwick quoted the way of using the rain, wind, horses, corpses, etc. There are countless people in the movie industry who commented that they admire Akira Kurosawa. He is a member of Academy of Motion Picture Arts and Sciences, honorary citizen of Tokyo, and won the Order of Culture. On September 6, 1998, he died of stroke.