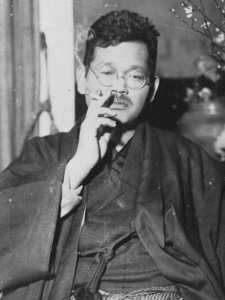 Hiroshi Kikuchi was active with the third and fourth series of Shinshincho (“New Shincho”) and later established the publishing company Bungeishinju. He also created two prestigious literary awards: Akutagawa Prize and Naoki Prize. In 1919, Kikuchi became a corresponding member of Osaka Mainichi Shimbun with Ryunosuke Akutagawa and wrote stories with a strong individuality such as Tojiro no Koi (“Love of Tojiro”), Tomo to Tomo no Aida (“Between Friends”), Kamino Gotoku Yowashi (“As Weak As God”) and Gimin (“Son of Righteousness”). Many of his works emphasize well-defined development of the motif rather than mood and feeling tone and he himself called the writing style as a theme novel. Kikuchi broke new ground in the field of newspaper novel with his popular novel, Shinju Fujin (“Pearl Lady”), by grabbing readers’ interest with well-connected composition. March 6, 1948, he died of cardiac angina.