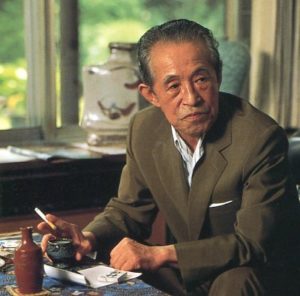 In 1949, Yasushi Inoue won the Akutagawa Prize for his work of Togyu (“Bullfighting”). His writing range of genres can be divided into three: works set in the modern era (Togyu (“Bullfighting”), Ryojyu (“The Hunting Rifle”), Hyouheki (“The Ice Wall”)), semi-autobiographical works (Asunaro Monogatari “The Asunaro Story”), Shiro Banba (“The Old Woman”)), and works based on histories of Japan and China (Tonko (“Dun Huang”), Fu Rin Kazan (“Wind, Grove, Fire and Mountain”)). Many of Inoue’s historical novels are translated into many languages and he has been nominated for the Nobel Prize for Literature several times. He died of acute pneumonia on January 29, 1991.