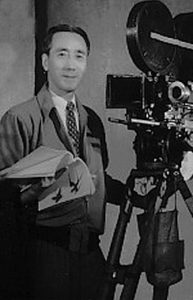 In 1925, he debuted with “Nanto no Haru (Spring in a Southern Island),” which he wrote, scripted, and directed. Then he continued to make humorous films one after another, including “Kanojo (She),” Hazukashii Yume (Embarrassing Dream),” and “Mura no Hanayome (Village Bride),” This style became a big hit with “Madamu to Nyobo (The Neighbor’s Wife and Mine),” which depicted an bourgeoisie’s life in a humorous way. On “Ikitoshi Ikerumono (Everything That Lives),” based on a novel by Yuzo Yamamoto, he succeeded in portraying the social issues that discussed in the original, and “Shinsetsu (The Fresh Snow),” which was made during the war became a big box office hit. After World War II, he released “Entotsu no Mieru Basho (The Four Chimneys),” which was based on Rinzo Shiina’s “Mujaki na Hitobito (Innocent People).” He also made Yasuko Harada’s “Banka (Elegy)” into a film, starring Yoshiko Kuga, which became a big hit. He died on May 1, 1981.