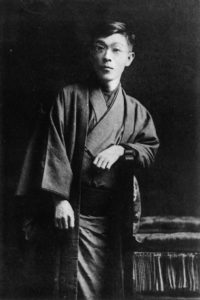 Izumi worked as a writer from the late Meiji Period (in the 1910s) to the early Showa Period (in the 1930s). He produced many masterpieces, which was inspired by miscellaneous literaｒｙ works created during Edo Period (1603 to 1867). He was also known for his interests in the supernatural elements and his unique sense of romanticism. He was recognized as a pioneer of contemporary fantasy literature. Izumi learned about writing under Kōyō Ozaki. His books Yakōjunsa (Night Watchman) and Gekashitsu (The Surgery Room) were highly praised as sophisticated works. Kōya Hijiri (The Holy Man of Mount Kōya) made him very popular among the public. Onna-keizu (The Genealogy of Women), Uta Andon (A Song by Lantern Light), and Yasha ga Ike (Demon Pond) are some of his best known books. His novels and plays had a great impact on cinema and theater industries as well as literary world. Izumi published Rukōshinsō (The Heartvine) in a literary magazine Chuō-kōron in July 1939, but he was fell ill at the end of the month and died of lung cancer on September 7, 1939.