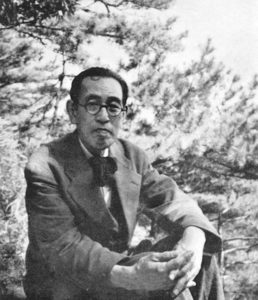 With his aesthetic style of writing, Kafu Nagai took an active part in Japanese literature from Meiji to Showa era. In 1902, he published Jigoku no Hana (“The Flower of Hell”), and later published Amerika Monogatari (“American Stories”) and Franse Monogatari (“French Stories”). Kafu became a professor at the Keio University and operated the literary magazine, Mita Bungaku (“Mita Literature”). His works include Ude Kurabe (“Geisha in Rivalry”), Tsuyu no Atosaki (“Before and After the Rainy Season”), Odoriko (“Dancing Girl”), and Danchotei Nichijo (“The Diary”). Kafu continued to write and kept his diary from mid-Taisho era until his death. These dairy entries depict changes in social situation and public morals during prewar and postwar period, thus regarded as very precious historical record. He died of gastric ulceration in his home on April 30, 1959.