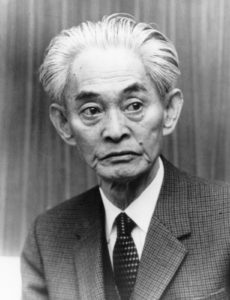 Yasunari Kawabata received recognition from Hiroshi Kikuchi and became a great figure in literature. Along with Riichi Yokomitsu, he established Bungei Jidai (“The Artistic Age”). Many works of Shinkankakuha, which Kawabata described as “new sensations in the writing of literature”, were submitted to this magazine, and Kawabata took an active part as the head of Shinkankakuha. After publishing works expressive of Japanese beauty like Izu no Odoriko (“The Dancing Girl of Izu”), Yukiguni (“Snow Country”), Koto (“The Old Capital”), he received the Nobel Prize for Literature as the first Japanese novelist to receive the award in 1968 and gave a lecture titled Utsukushii Nihon no Watashi (“I in the Beautiful Country of Japan”). April 16, 1972, he committed suicide by gassing himself.