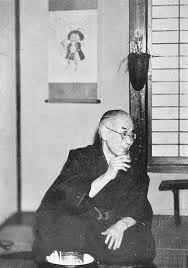 Attending Meiji Gakuin University from the age 15 to 19, Toson gradually became aware of literature under the influence of unconventional traditions of the school. Toson literature is even said to be originated during his days at the university. Toson joined Bungakukai, a literary group, and as a romantic poet, published a collection of poems including Wakanashu (“Collection of Young Herbs”). Later, Toson turned a novelist and published Hakai (“The Broken Commandment”) and Haru (“Spring”), and is thus regarded as a prominent naturalist novelist.His other works include, Ie (“Family”), considered to have achieved the highest level in Japanese Naturalism literature, Shinsei (“New Life”), a confession of his own incestuous relationship with his niece, Yoakemae (“Before the Dawn”), a historical novel modeled on the life of his father.Although he began his serialization of Tohonomon (“The Gate of the East”) in 1943, he died of a stroke at his own home in Oiso, Kanagawa prefecture on 22nd of August.