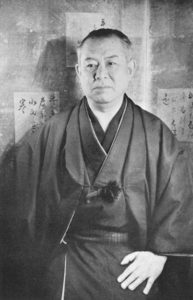 He worked as a writer from the end of the Meiji Period (in the late 1900’s) to after World War II. He illustrated Japanese aesthetics in his works such as “Chijin no Ai (Naomi, or A Fool’s Love) ,” “Sasameyuki (The Makioka Sisters),and other prominent pieces which made him known as a prolific writer. During the Taisho Period (from 1912 to 1926), he published some of his works, which included the essence of the contemporary lifestyle at the time. Then his interests extended to writing detective stories that seem to have influenced Rampo Eodogawa.He also actively cultivated his new skills in cinema and other fields.During the war, He worked on his big novel “Sasameyuki,” which depicts the life of Matsuko and her sisters. He continued his writing even though his publication was stopped by censorship of the military government. After the war, the completed story was published which earned him Mainichi Publishing Culture Award and Asahi Award.He was nominated for the Nobel Prize for Literature and also elected in 1964 to honorary membership in the American Academy and Institute of Arts and Letters, the first Japanese writer to be so honored.He died of kidney and heart failure on July 30, 1965.