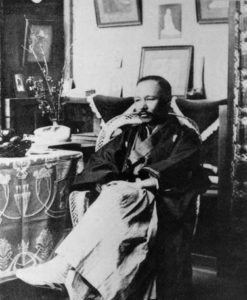 Since the end of the Second World War, Ogai Mori is regarded as one of Japan’s great literary figures on the same ranks as Soseki Natsume. After graduating from government medical school (the predecessor for Tokyo Imperial University’s Medical School), Ogai was sent by the Army to study in Germany for four years. He published his novel, Maihime (“The Dancing Girl”), a poetry book Omokage (“Image”), and a translation of Sokkyo Shijin (Improvisatoren, Hans Christian Andersen) After his returned to Japan, Ogai would later on publish his own literary journal, Shigarami Soshi (“Constraint Brochure”) and pursue a career in writing. Although Ogai did little writing during his years as Army Surgeon-General, he began his own literary magazine, Subaru (“Sterope”) for which he published his work of Gan (“The Wild Geese”). Ogai was deeply affected by the martyrdom of General Nogi Maresuke and wrote Okitsu Yagoemon no Isho (“The Last Testament of Okitsu Yagoemon”) which marked as his turning point to writing mostly historical stories like Abe Ichizoku (“The Abe Family”). He died from atrophic kidney and lung tuberculosis on July 9, 1922.