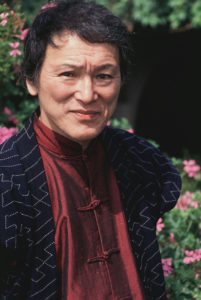 In 1984, he debuted as a movie director with “Ososhiki (The Funeral)” at the age of 51, which was highly acclaimed in Japan. He received more than 30 awards for this movie including the Japan Academy Award. By directing this movie, he discovered that he could take advantage of all his experiences as an actor, essayist, documentary writer, CM writer, illustrator, and commercial designer. He continued directing movies such as “Tanpopo” and “Marusa no Onna (A Taxing Woman),” which were meticulous, and contained quotes from other movies. He became a leading film director in Japan, and established an “Itami movie” brand. On December 20, 1997, he committed suicide by leaping from a building in Azabu, Tokyo, where Itami Production was located, after a sex scandal he was allegedly involved in was picked up by a gossip weekly magazine “Flash.” He left a suicide letter written by a word processor, which said, “I will prove my innocence by dying.”