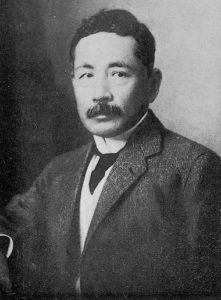 Soseki Natsume is well known for his works of Wagahai wa Nekodearu (“I Am a Cat”) and Kokoro (“The Heart”) and is regarded as one of the great literary figures during the Meiji and Taisho period along with Ogai Mori. During his years at Tokyo Imperial University (now the University of Tokyo), Soseki met Shiki Masaoka who tutored him in the art of composing haiku. Upon graduation, Soseki began teaching at Matsuyama Middle School and then went off to study in the United Kingdom. After retuning, Soseki published Wagahai wa Nekodearu (“I am a Cat”) in the literary magazine, Hototogisu (“The Little Cuckoo”) while teaching at the University of Tokyo. Wagahai wa Nekodearu got great reviews, and he wrote Botchan (“Little Master”) and Rondon Tou (“London Tower”). He left the university to take up a position with Asahi Shimbun Newspaper and started serialization of Gubijinso (“The Poppy”) and Sanshiro (“Sanshiro”) in the newspaper. In 1916, he was diagnosed with diabetes and died of internal hemorrhage on Dec. 9 while writing Meian (“Light and Darkness”).