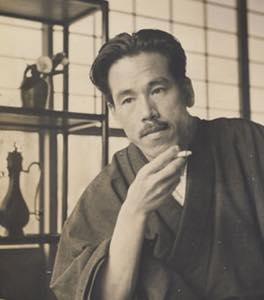 In 1927, he joined Tanizaki Juro Production as an actor. In 1928, he joined Kataoka Chiezo Production as an assistant director and a writer, and in the same year he debuted as a director with “Katakiuchi Ruten.” Then he made movies such as “Kokushi Muso (The Best in the Country)” and “Akanishi Kakita (Capricious Young Man),” and became one of the great directors and the “intellectual” in the film industry. In 1938, he directed his last movie “Kyojin Den (The Giant),” then in 1940 he went back to Kyoto and wrote scenarios of “Muhomatsu no Issho (The Rickshaw Man)” and “Te wo Tsunagu Kora (Children Hand in Hand)” at Nikkatsu, which were made into films by his friend Hiroshi Inagaki. He died on September 21, 1946 at the age of 46.