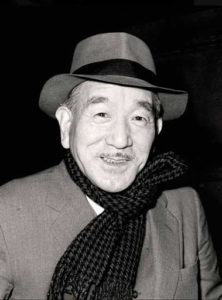 Before World War II, he was known for his comedy films such as “Daigaku wa Detakeredo (I Graduated, But…)”, and “Umarete wa Mitakeredo (I was born, but…).” During the war, he was conscripted into the Japanese Army’s news film section in Singapore. There he watched many seized Hollywood movies. After the war, he made a comeback with “Nagaya Shinshiroku (Record of a Tenement Gentleman).” Then he kept directing classics such as “Banshun (Late Spring),” “Bakushu (Early Summer)” and “Tokyo Monogatari (Tokyo Story),” and became one of the most influential film directors in Japanese film scene. He is globally known as a film artist more than as a movie director, and highly acclaimed in the world together with Kenji Mizoguchi and Akira Kurosawa. His “Tokyo Monogatari” is very popular in Europe. He died on his 60th birthday, December 12, 1963, from a throat cancer. After his death, his world recognition came up, especially in France, his directing style being considered unique, and famous cineasts tried to reevaluate his films. In 2003, on the 100th anniversary of his birth, a project was launched to hold commemorative events in various cities such as screenings of his films.