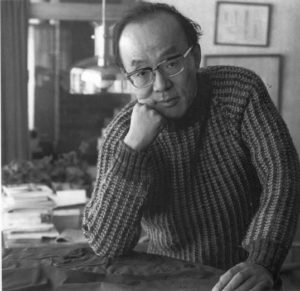 Endō is categorized as one of the “Third Generation” among the writers. He won the Akutagawa Award for his novel, Shiroi Hito (White Person), which was publishied in 1955. Many of his books such as Chinmoku (Silence), Umi to Dokuyaku (The Sea and Poison), and Samurai (The Samurai) dealt with Christian themes. He became seriously ill in 1960 and had to move for recuperation. Then he started to use “Korian Sanjin” as a pseudonym and published many humorous essays. Chinmoku (Silence) and many other works have been published in the U.S. and Europe and received a high evaluation. Endō was nominated for the Nobel Prize for Literature,supported fervently by Graham Greene, but he never received the Prize because some members of the Nobel committee did not like his novel Scandal, which was considerd as pornography. Endō died of respiratory failure caused by pneumonia on September 29, 1996.