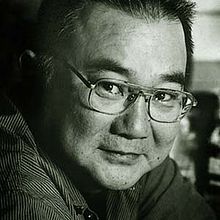 Takeshi Kaiko wrote many essays and reports besides novels and was well-known as a gourmet. While working at Kotobukiya (the present Suntory), he won the Akutagawa Prize with his Hadaka no Osama (“The Naked King”) in 1957. Also known as an enthusiastic angler, he fish while traveling all over the world and Japan. Many of Kaiko’s works like Opa! (“Opa the Fishing Travel”) and Fish on (“Fish on”) reflect his love of fishing. After an operation to remove esophageal cancer, he finished Shugyoku (“The Jewel”). However, Kaiko was re-hospitalized and died of pneumonia which occurred in conjunction with an esophagus tumor on Dec. 9, 1989.