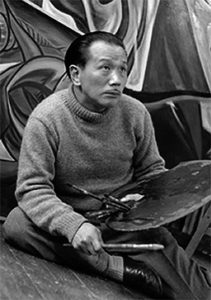 He is known for his witticisms such as “Art is an explosion.” “Art is magic.” “Isn’t it nice to find a face on the bottom of your glass?” He is also famous for his “Tower of the Sun”, which became the symbol for Expo in Osaka in 1970. After his death, his studio/home became his memorial museum. He was attracted to Jomon era and Okinawa, and left many 2- and 3-dimensional works, as well as writings. Late in life he appeared a lot on TV or other media, and he was active to appear on many variety shows on commercial TV stations. On January 7, 1996, he died of acute respiratory failure at Keio University Hospital.