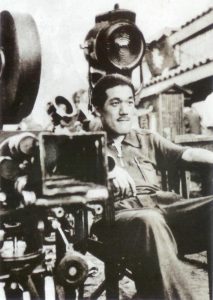 In 1932, he debuted as a movie director with “Iso no Genta Dakine no Nagadosu(Iso-no-Genta’s Long Sword),” which is a film version of Shin Hasegawa’s play. This film attracted a critic Matsuo Kishi’s attention and received much acclaim. This way he caught public attention, ranked in the top 10 of that year, and he became one of the masters in Japanese film industry from his first film. After that, he was kept praised as a young genius director, and released “Bangaku no Issho (The life of Bangaku)” and “Machi no Irezumimono (The Village Tatooed Man).” He also formed a scenario-writing group “Narutakigumi” together with Hiroshi Inagaki, Eisuke Takizawa and a screen writer Fuji Yahiro, and largely innovated period films. He had a wide circle of acquaintances, and he enjoyed close friendship not only with those from “Narutakigumi,” but also with the film people in Kyoto such as Daisuke Ito and Mansaku Itami, and those in Tokyo such as Yasujiro Ozu and Hiroshi Shimizu. In 1937, he directed his last film “Ninjo Kamifusen (Humanity and Paper Balloons)” for PCL(currently Toho) before he was drafted into the Japanese Army. On September 17, 1938, He died on the field by disease at a hospital in Kaifeng, Henan Province, China.