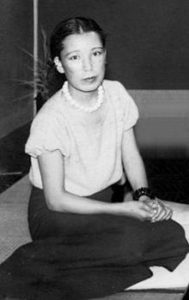 Many of Chiyo Uno’s masterpiece like Ohan (“Ohan”), Iro Zange (“Color Confession”), Aru Hitori no Onna no Hanashi (“The Story of A Woman”) are set in Iwakuni, Yamaguchi prefecture. Uno published Ame no Oto (“Sound of Rain”) in 1974. Published in 1973, Ikiteiku Watashi (“I, Carry on Living”), is said to be an autobiographical novel and one can sense her love for her family and Iwakuni where she was born and raised in the novel. Uno was also a popular Kimono designer and very active as a competent businesswoman until last days of her life. She supported the conservation work of over-1,500-year-old cherry trees, Usuzumi Zakura, in Motosu-city, Gifu prefecture, and her Usuzumi Zakura related works are on display at Sakura Museum. On June 10, 1996, she died of acute pneumonia at Toranomon Hospital, Minato-ku, Tokyo.