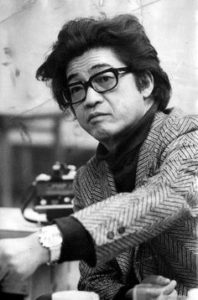 Abe’s novel Owarishi Michi no Shirube ni (At the Guidepost of the End of the Road), originally titled Nendo-bei (The Clay Wall), was published by Shinzenbi-sha in 1948. Abe was highly praised by Yutaka Haniya, one of the founders of a literary magazine entitled Kindai Bungaku (Modern Literature). In his book review of Kabe (The Wall), Haniya not only proclaimed Abe as his successor but said Abe’s talents excelled his own. In the February 1951 issue of Kindai Bungaku, Abe published Kabe- S•Karuma Shi no Hanzai (The Wall -The Crime of S•Karuma), which was greatly inspired by Alice’s Adventures in Wonderland aswell as many stories of Franz Kafka. Abe won the 25th Akutagawa Prize for the first half of the year in 1951. Toshimitsu Ishikawa also won the prize this year for his book entitled Haru no Kusa (Spring Grass). Abe died of an acute heart failure on January 22, 1993.