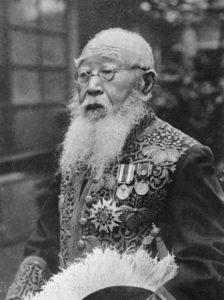 After the Meiji Restoration, the demand as a Buddha carver stopped due to a movement to destroy Buddhist statues, and woodcarvings became unpopular when ivory carvings for export came into style. This situation made Koun’s life difficult. However, he continued to devote himself to woodcarving, absorbed western art, and revived the fading woodcarving by adapting realism. This way he played an important role of passing the woodcarving techniques by the Edo era to modern days. In 1893, he sent “Roen (The Aged Monkey)” to the world exposition in Chicago, and in 1919, “Sanreikago (Protection by the Spirit of Mountain)” to the world exposition in Paris. In 1926, He retired from the teaching position at the Tokyo School of Fine Art, and became an emeritus professor. He died on October 10, 1934.