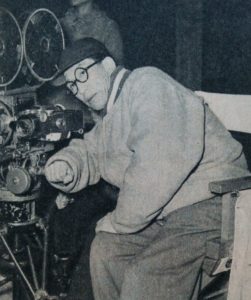 In 1920, he debuted as a movie director with “Imoto no Shi (The Death of My Sister) .” In 1932, his talking picture “Chushingura (The Loyal Forty-Seven Ronin) became a big hit. His silent film “Kurutta Ippeji (A Page of Madness)” in 1926 was re-released in 1982 with a new print and score, to world acclaim. He is known as the first Japanese film director who was acclaimed in the Western world. After World War II, in 1953, his gorgeous and colorful period film “Jigokumon (The Gate of Hell)” received Palme d’or at Cannes, Academy Honorary Award and Best Costume Design Award, and New York Film Critics Circle Foreign Language Film Award, which made him recognized as a world-class film director. After that, as an executive of Daiei, he employed former Miss Japan Fujiko Yamamoto and raised her to be a star actress. In 1958, “Shirasagi (The White Heron)” received the Special Prize at Cannes, which is one of the proofs of his world recognition. He died on February 26, 1982.