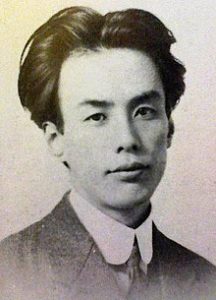 Many of Ryunosuke Akutagawa’s works include short-stories such as Imogayu (“Rice and Sweet Potato Porridge”), Yabu no Naka (“In a Grove”), Jigoku Hen (“Hell Screen”), Haguruma (“Cogwheel”). He also borrowed themes from Japanese classics and have even written some nursery tales like Kumo no Ito (“The Spider’s Thread”) and Toshishun (“Tu Tze-chun”). His first book is Ronen (“Old Age”). In Oct., 1915, Akutagawa published one of his outstanding works of Rashomon (“Rashomon”) and became Soseki Natsume’s acquaintance through an introduction from his classmate, Miekichi Suzuki. In 1916, He re-established the fourth series of Shinshicho (“New Currents of Thought”),a literary journal and inserted his work of Hana (“The Nose”) which was highly praised by Soseki Natsume. Akutagawa’s friend Hiroshi Kikuchi established the Akutagawa Prize, the literary award, in his honor. On July 24, 1927, he commited suicide by taking poison. His dying words claimed he felt a “vague uneasiness”.