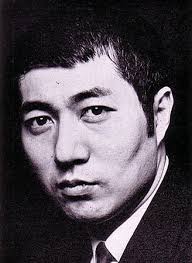 He was claimed to be an alchemist of words, and left a huge amount of novels, essays, critiques, plays, scenarios, and so on. He was also famous in films and theaters. He was a darling of the media, and had been engaged in various activities that were often taken up by newspapers and magazines. On May 4, 1983, he died of blood poisoning at Kawakita Sogo Hospital in Suginami-ku, Tokyo.