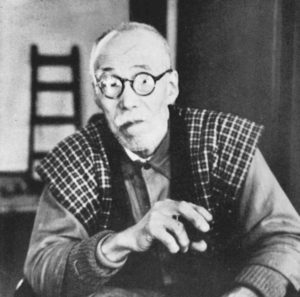 He was active in many areas such as sculpture, painting, poetry, etc. He is famous for his poems such as “Chiekosho (Chieko’s sky)”, which have been taken up in school textbooks, so sometimes he is regarded as a poet. He graduated from the sculpture course of the Tokyo School of Fine Arts, and then proceeded to the graduate course. After that, he reenrolled in the western painting course, but left the school shortly. In 1906, he set out to study sculpture abroad on the advice of Toru Iwamura. He studied in New York for one year, in London for one year, and in Paris for nine months, then returned to Japan in 1909. He was discontent with Japanese art world, resisted his father, and refused to teach at the Tokyo School of Fine Arts. “Midoriiro no Taiyo (Green Sun)” in 1910 was a critique that declared the freedom of art. He died of tuberculosis in 1956. The date of his death (April 2) is called Rengyo (Forsythia) anniversary.