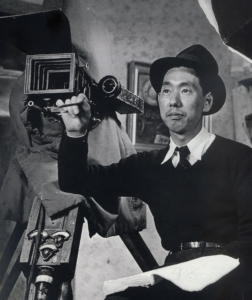 On his movie in 1937, “Nadare (Avalanche)”, which was based on a novel written by Jiro Osaragi, a film master Akira Kurosawa helped him as the assistant director. In Kurosawa’s autobiography, he wrote “He wasn’t quite satisfied with the piece, but I learned a lot from him during the shooting.” Shortly after World War II, when Toho film studio stopped functioning due to Toho Dispute, he left Toho with Kajiro Yamamoto, Akira Kurosawa, Senkichi Taniguchi and others, to establish “Eiga Geijutu Kyokai (Film Art Association).” Then he directed films for Toho, Shin-Toho, Shochiku, Daiei, etc. on a freelance basis. In 1951, his film “Meshi (Repast),” based on Fumiko Hayashi’s novel and starred by Setsuko Hara and Ken Uehawa, was highly acclaimed. In 1955, he returned to Toho and his masterpiece “Ukigumo (Floating Clouds)” was made. It still remains as one of the best romantic films in the world film history. Yasujiro Ozu commented, “Ukigumo is a film I would never be able to make.” On July 2, 1969, he died of rectum cancer.