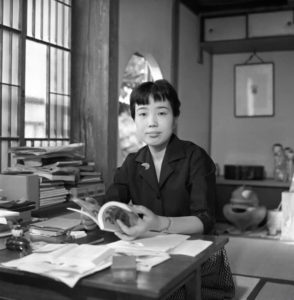 Sawako Ariyoshi wrote books ranging from Japanese history and classical art to modern social problems, thus covering all sorts of genres. Ariyoshi and China were linked by fate. In 1961, she visited China with Katsuichiro Kamei, Yasushi Inoue, Ken Hirano and Eiji Yoshikawa before the normalization of diplomatic relations and was invited back on many occasions. In 1965, Ariyoshi spent six month studying Catholicism in China and in 1978, joined a commune to write Ariyoshi Sawako no Chugoku Report (“China Report of Sawako Ariyoshi”). Representative works of Ariyoshi include, Ki no Kawa (“The River Ki”), Hanaoka Seishu no Tsuma (“The Doctor’s Wife”) and Kazu no Miyasama Otome (“Her Highness Princess Kazu”). She died of heart failure on August 30, 1984, in her home in Tokyo.