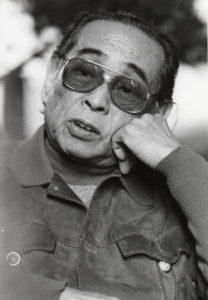 He made a grand debut as a movie director with “Hanasaku Minato (The Port Where Flowers Bloom)” in 1943, which received Sadao Yamanaka award. Akira Kurosawa also directed his first film on the same year, and the two as lifetime rivals supported the Japanese film industry. In 1951, he released “Karumen Kokyo ni Kaeru (Carmen Comes Home) ,” the first color feature film in postwar Japan. This film received the first prize in NHK Film Top Ten, and Japan Movie Culture Award. In 1954, “Nijushi no Hitomi (Twenty-four Eyes)” received various awards including the Blue Ribbon Award, Foreign Language Film Award and Golden Globe Award. He received the Order of the Rising Sun, Golden Rays with Rosette in 1984, and was named a person of cultural merit in 1991 by the government. On December 30, 1998, he died of a stroke at his home in Minato-ku, Tokyo. After his death, he received an Elan d’or Special Award for his merit.