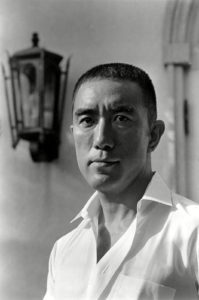 Mishima graduated from the Law School of Tokyo Imperial University and worked for the government’s Banking Bureau of Finance Ministry for 9 months. After quitting this job, he started his career as a writer. His major books are Kamen no Kokuhaku (Confessions of a Mask), Kinjiki (Forbidden Colors), Kinkaku-ji (The Temple of the Golden Pavilion), Shiosai (The Sound of Waves), and Hōjō no Umi (The Sea of Fertility).He also wrote some plays such as Sado Kōshaku Fujin (Madame de Sade), Waga Tomo Hittorā (My Friend Hitler), Kindai Nōgakushū (Five Modern Noh Plays). He was known for his aesthetic writing style. He had also won many awards and was nominated for the Nobel Prize for Literature several times. He was famous for being gay, but was also married to a woman. On the day he finished writing Hōjō no Umi (The Sea of Fertility) in 1970, he visited the Tokyo headquarters of the Eastern Command of Japan’s Self-Defense Forces – the Ichigaya Camp. Mishima made a speech there and committed ritual suicide along with Masakatsu Morita after the speech (The Mishima Incident).