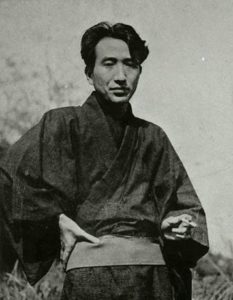 He had desired to be a writer since he was a student, but he repeatedly tried to commit suicide. In 1935, “Gyakko (Reversal)” was nominated for the first Akutagawa prize. After marriage, he wrote “Fugaku Hyakkei (The Hundred Views of Fuji)” among other pieces, and became a popular writer after World War II. His famous novels include “Ningen Shikkaku (No Longer Human)”. He wrote many novels and essays from his first book of collected works “Bannen (Declining Years)” by the time he drowned himself. He attempted to commit suicide 4 times in his 39-year life, and in 1948, he drowned himself in Tamagawa Josui River with his mistress, Tomie Yamazaki.